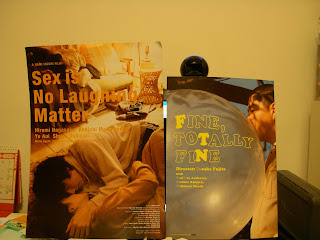 On the third night of the Hong Kong International Film Festival, I checked out the independent comedy-drama Sex Is No Laughing Matter, with it boy Kenichi Matsuyama starring as a college student who falls in love with an older woman. Not too much to say, though I can say it's the only screening so far where the audience did not applaud at the end of the film. However, the audience still reacted fairly well to it, especially to Yu Aoi's performance as a girl who expresses her frustrations in the cutest ways possible. However, it's the detached visual style of director Nami Iguchi will make this a film that won't travel far beyond film festivals.

By the way, anyone expecting any explicit content will be disappointed: It's definitely very tame in showing the sex.

On the other hand, the deadpan comedy Fine, Totally Fine should have little trouble reaching a wider audience that's looking for laughs more than attractive stars. In Japan, this is more well-known as comedian Yoshiyoshi Arakawa's first starring role, but for the audiences, it'll just be known as the funniest Japanese comedy so far in 2008. This is one where I would recommend everyone to not watch any trailers for. Just go in and prepared to be surprised.

After 4 movies, this is how I would rank my experience at the festival so far:

Tomorrow: Wrestling With a Memory (Gachi Boy) and Glasses.
Posted by GoldenRockProductions at 7:59 AM

Glad you're another fan of "Fine, Totally Fine". I too caught it at the HKIFF yesterday (and am posting HKIFF related bits on my blog). :)

"it's the only screening so far where the audience did not applaud at the end of the film."

Hahahahaaaa, it really amazed me how positively responsive HK festival audiences were! In Istanbul people very rarely applaud. In fact I attended to a smaller scale festival a few months ago and the only film which was applauded (among the four I have seen) was Yobi - The Five Tailed Fox (and there were lots of kids in the film...)