It's kind of sad, but I'm already halfway through my tickets at the Hong Kong International Film Festival. Today it's films 5 and 6: The Japanese wrestling comedy Gachi Boy Wrestling with a Memory and Naoko Ogigami's Megane. 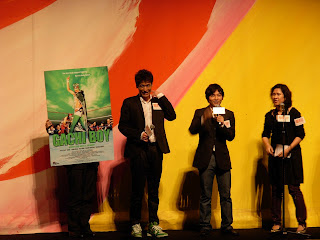 Some people criticize that the HKIFF has been getting more and more commercial films, to the point of losing its purpose. The choice of Gachi Boy may be one of those commercial films they're talking about. From the people at Robot (including uber producer Chihiro Kameyama)and Fuji TV is another underdog sports comedy that features a protagonist trying to pick up pro wrestling, despite all the odds against him. This isn't a "film festival" movie by any means, but I'm happy that the HKIFF people brought a film that wouldn't be shown in Hong Kong otherwise (no big stars, no real attractive gimmick for a broad HK audience). It's a genuine crowdpleaser with an excellent lead performance, even if it is the usual emotionally manipulative stuff. 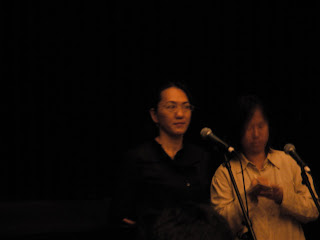 A similarly crowdpleasing film that didn't need to resort to melodramatic theatrics is Naoko Ogigami's Magane. A simple comedy about a woman escaping city life at an un-named island where everyone spend their days being lazy next to the ocean, it features eccentric characters and no real plot to speak of. Nevertheless, I think it left more of a smile on people's face than a hearty laugh. One audience even said that being in the hustle and bustle of Hong Kong, just seeing the film in therapeutic. I think that's the biggest compliment one can give to Ogigami-san (pictured above), and one that I wholeheartedly agree with.

Wednesday: The Irish film Once
Posted by GoldenRockProductions at 9:27 AM