Contract Lover, or Alfred Cheung, please come back to the 21st century 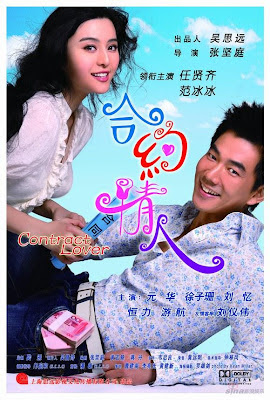 Contract Lover marks director/charm-less game show host Alfred Cheung Kin-Ting's first film for the Mainland China market. To me, it's the return of lazy filmmaking from the late-80s/early-90s. Then again, Cheung himself (with the box office word-of-mouth to prove it) said that the film actually tested quite well when he showed it in Beijing. What does that say about my taste and the taste of Mainland Chinese audiences then?

The plot descriptions are out there: successful financial....guy Richie Ren (I seriously have no idea what he does) has a rich life and a westernized girlfriend that he's ashamed to take home to traditional dad. Dad practices martial arts and - this is just according to the plot descriptions out there - resents the fact that son never took up martial arts. To get his parents to approve of the new girlfriend, he hires a contract girlfriend that acts so badly that the parents will take anyone else, i.e. westernized girlfriend.

The lazy part is that almost all of this is gone over in the first 5 minutes of the film via tons of voiceovers. During this section, the film also went over the girl they hired - Joe Lau (I think they meant Jo for Joanna, but ok) - and pretty much everything about her life. Usually, this is enough plot to stuff the first act, but Cheung amazingly stuffs all this information at once. This was going to be a long 95 minutes.

With bald Mandarin-speaking white homosexual best friend in tow, Joe Lau (played by the beautiful Fan Bing-Bing) goes to Richie Ren's house and attempts to cause chaos through all kinds of stupid things like giving sexy underwear to mother-in-law, teaching pole dancing, and in the stupidest one of all - break the wooden stick that's considered a family heirloom.

The film is filled with stupid ideas that sometimes actually do induce some kind of painful laughter, and a lot of them just feel contrived (one of the people at the screening I attended called this film "My Sassy Rent-a-girl"). I would be more tolerant to a film that actually makes me laugh, but Cheung has obviously so abandoned the Hong Kong market with this film. He's still attempting to cash in laughs with old tricks (honestly, who the hell still uses "The Moon Represents My Heart" and expected to be taken seriously?) that I honestly can't expect savvy Hong Kong audiences to buy into it. No, dubbing everyone into dense chaotic versions of Cantonese (Even the Hong Kong actors are forced to speak Mandarin here) dialogue doesn't make it any better.

Then again, there were a few young girls behind me that sounded like they really were having a good time until they walked out half way through. What does that say about the taste of Hong Kong audiences then?

By the way, I've reevaluated the film since watching it, and decided that Super Fans is still the worst mainstream Hong Kong film this year. At least I laughed at this one.
Posted by GoldenRockProductions at 2:52 AM