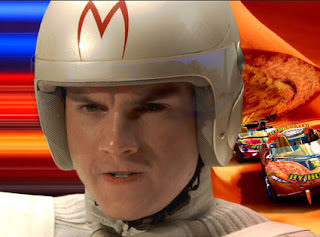 Speed Racer himself struggling to catch all the colors on screen

I always thought I would use this blog to champion smaller, independent films that need all the public attention I can give. Instead, I'm about to use this blog to push for the latest Hollywood blockbuster. Go figure.

If you're reading this, and The Wachowski Brothers' Speed Racer is still playing near you on the big screen, then go. Now. It's easily the most fun I've had this year at the theater that's actually intentional. And I really liked Iron Man.

Forget the serious-minded critics, who'll tell you that the plot makes no sense, the images are too much, or the acting was wooden. This is a true anti-thesis to the dark comic adaptations that believe that human in spandex flying around fighting monsters can actually have dark psychological issues worthy of years in therapy. The Wachowskis have created pure and - dare I say - shameless entertainment that must be enjoyed on the big screen.

I never watched any of the cartoon (at least I don't remember watching it), and I still had tons of fun waiting for the next dizzying, physics-defying race sequence to amaze me. Even the Wachowskis' technique of using flowing heads as wipes between shots worked. Hell, even the annoying chimp in the trailer worked. The kid, on the other hand, didn't, but that's another story.

However, enjoyment comes on one condition, especially for film students: Throw away any expectation for "meaningful filmmaking", i.e., symbolism, deeper issues beyond the flashy surface. This is unabashedly made to entertain the kids, and it works damn well as it is. Even the dialogue scenes, which I expected to be stilted and wooden like they were in the trailers, were competently directed.

I already paid to watch this once, but I'm going to pay for another ticket to watch this in digital projection in a theater with seats that rumble at low bass. But I'm not even going to complain, because it'll be worth it, and I haven't found a movie worth going to the theaters twice for since Batman Begins.
And just to keep this blog Asian-related: Rain was OK, and didn't ruin the movie. He even played a semi-important role, and he did it just fine.

Still, it was hard to not yell "RAAAAAAAAIIIIIIN" Colbert-style every time he appears on screen, though.

And when you're done decompressing from all the colors, maybe you can come back here and tell me what you thought.
Posted by GoldenRockProductions at 2:55 AM