Blood Brothers, or How I Will Learn to Write a Fuller Screenplay 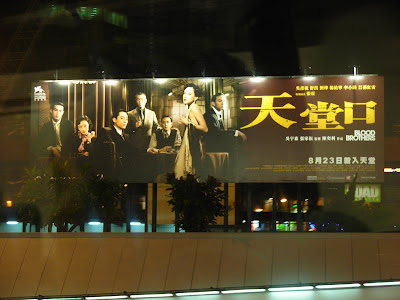 There are certain things you learn in film school, especially about writing screenplays - three-act structure, character arcs, good and bad guys, things like that. Some of these show up quite obviously in Alexi Tan highly-anticipated (in some circles) feature-length directorial debut Blood Brothers, and some of them are desperately missing.

Supposedly somewhat based on John Woo's Bullet in the Head (John Woo and his producer Terence Chang are producers on this), three country bumpkins go out to Shanghai to make it big working under notorious gangster Hung (quite well-played by Sun Honglei). Of course, something tears these lifelong friends apart, and a lot of blood will be shed.

When I review a movie, I think about expectations, as in what the film is trying to achieve. Rush Hour 3 is a crappy movie, but at least it doesn't even strive too much for any type of artistic quality, and it's entertaining enough. Not entertaining enough to earn any recommendation, but I digress. Blood Brothers strives to be a very serious and affecting drama about brotherhood and loyalty, but its pretensions is what kills it. The mood of Blood Brother is very gloomy, almost to the point of screaming "look at everyone emote! Get nervous, some important characters will be killed! That's right, feeeel the sadness from my elegant dark violin leitmotif!" But characters are underwritten and the film just simply breezes by some important plot points, undermining its storytelling.

Simply said, It was very easy to see when the screenplay was being written, it was written to get to the plot points that separates the three acts, along with fillers that comes between it. The film lacked fluid progression, and was even strangely episodic, considering it's only 95 minutes long.

Don't even get me started on the actors - No matter how you mess with the hair or what kind of clothes you put him in, Daniel Wu is miscast as the moral compass, and Liu Ye is now the young master of overacting. Unlike Wu, who's forced to be the boring central character who gets to lecture everyone about morals, at least Liu actually seems to have a bit of fun, as is Sun Honglei. Chang Chen plays the character that stands out the most, but his role, which is bigger than the trailer suggests, is again so underwritten that he simply seems to give up in the end until he gets to hold a gun and be a badass motherfucker. Some actors will manage to survive this, but I doubt anyone's status would be elevated by this film, including Woo and Chang.

I suppose the best way to summarize this is to imagine Woo trying to emulate Wong Kar-Wai. This is your run-of-the-mill John Woo brotherhood film without the action, and we know that Woo's worst directorial trait is doing drama. If Tan really wanted to live up to the Woo/Chang name, then lighten the hell up, man. I honestly wasn't expecting much, and my instincts was sadly way too right on. That lowered expectation itself is what prevented Blood Brothers from being the disappointment of the year.
Posted by GoldenRockProductions at 8:37 AM

I don't know why I'm enamored with Daniel Wu. Maybe just the fact that he's a Bay Area product. At least he knows he's lacking in the acting dept. and took a summer course at the Lee Strasberg Institute. Or perhaps that's mainly to further his directorial efforts.

I don't really think Daniel Wu is a bad actor at all. In fact, I think I would've liked to see Chang Chen and Daniel Wu switch roles. I simply thought he wasn't right for the role, and the weaknesses from his character is from an underwritten script and underdeveloped character.